On Facebook Craig Bodeker posted a link to a news story about a serial rapist, the police suggesting women be more cautious in how they’re dressing, and the response to it. It is a new story, though almost identical to the incident that sparked the slut-walks.
I thought I’d write a fable, it’s my first, and I did it in one go:

The Two Ducklings and the Dragon 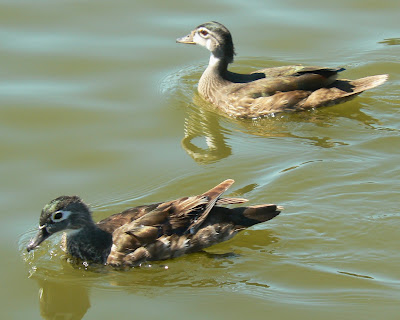 Two ducklings were wading in a pond when a loud crack was heard in the distance.
“What in the world was that?” asked one to the other.
“That was a duck eating dragon, that is the sound they make when they have eaten one of our brothers or sisters,” replied the second.
“I’ve never heard of such a thing!”
“Well, few ducks have lived to tell of it, and those that have, say that it is so quick you cannot see it snatch you out of the sky”.
CRACK! The sound echoed across the pond.
“Well, I don’t believe in such a thing, I think I’ll go and look!”
“Oh you mustn’t, you will certainly be eaten!”
“I think that women…”Â sorry, I mean ‘ducks’… “should be able to wear…” ahem, excuse me, ‘fly’… whatever they want!”
Oh goodness, that should be “wherever they want”.
Let me try again: “I think that ducks should be able to fly wherever they want!” Said the first duckling to his friend, quite incensed at the seconds egregious insensitivity to his freedoms.
“No, I’m not saying you cannot fly where you want, it’s that the dragon is dangerous, and you can’t be sure where he’ll be. If you hear him bark, then you should fly the other way, if anything.”
“Oh how DARE you! You are blaming ducks for their own demise! You would like to tell everyone where they should and should not fly!” The first duck was becoming quite outraged, and squinted at the first, furiously twitching his little duck tail in anger.
“I am doing no such thing! It’s only common sense, and I warn you because I love you and don’t want you to be eaten by the dragon,” sputtered the second, hurt and confused by such a reaction to his show of concern, to what he thought was true and important wisdom about dragons.
Crack! Carack! The sounds were louder now.
“That’s IT! Not only do I think you’re foolish for believing in dragons, I will fly over and prove to you that there is no such thing!”
And with that, the first duckling flew away and toward the loud sound.
His friend, now alone, saw him fly slowly out of sight. Worried, he waited. He wanted nothing more to be wrong, but his experience and the stories of others told him otherwise.
CA-RACK!
Waiting, what seemed like forever, the sun began to set and the duckling needed to go home. He wished there were no such things as dragons, but he wished even more that his dear friend was still with him.

Both ducklings believed a falsehood.
One, that there was such a thing as a dragon. This is a belief that, though wrong, served him well.
The second, that someone telling them to do something they don’t want to must be a way to control them, and keep them from being free. This could have served them either way, but on this pond, on this day, there might have well been dragons.